Yes! Working with the President

Yeah way cool…we got to shoot for the Late Show with Stephen Colbert and POTUS. Shooting a segment that aired a few days later. Hilarious!! Of course we all had the White House Photog take a picture with the President. I know it’s tough to see unless you can zoom in, but I’m sitting at the table on the left!

Spent some serious time in the North Country as the main crew for this ABC News 20/20 story in Potsdam, NY for about a year, following the trial of Nick Hillary. Picture is a 3 camera set up with Elizabeth Vargas (correspondent) and Tandy Cyrus (Garrett’s mom) 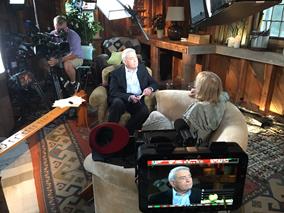 Yes, it is true! We went to Carly’s home on Martha’s Vineyard and worked with Dan Rather on his interview with her. She was great, so nice and very complimentary to the whole crew! Of course Dan was his awesome self, consummate professional, a real newsman! It was both fun and a privilege to work on this shoot!